The issue of how to maintain Sheffield’s trees has created considerable controversy and has attracted attention from the national media. Friends from all over Britain ask us what’s going on. 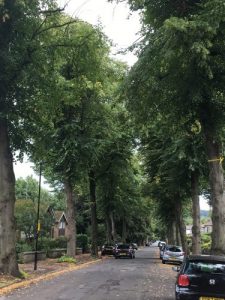 As beekeepers we are of course very much aware of the synergy between the environment and honeybees – our bees rely on readily available forage and our fruit and veg rely on honeybees for pollination. Urban trees are a vital source of nectar and pollen for healthy bees in a city such as Sheffield. It is difficult to compare like with like and easy to generalise but a mature tree can yield nectar and pollen comparable to a field of flowers. (see this leaflet by the British Beekeepers’ Association on the benefit of trees to bees: BBKA leaflet)

As a registered charity with stated aims (see our Constitution on the “about us” page) we cannot get involved in lobbying beyond our remit but people do want to know what we think. We can only present a dispassionate view of the situation written by our own environmentalist Marion Watson and point our website visitors to articles and videos available on the web.

Please be aware that events move on and some of this information may well get out of date.

Sheffield’s pride in its reputation as the greenest, most tree-covered city in Europe is being severely tarnished by the behaviour of the City Council and their contractor, Amey. Sheffield City Council has entered into a Private Finance Initiative contract with Amey for £2.2bn over 25 years to maintain Sheffield roads, pedestrian pavements and street trees. Under the terms of this ‘Streets Ahead’ contract it is reported that the company could cut down up to 50% of the city’s 36,000 street trees. In the period from 20th August 2012 to 30th December 2016, 4246 highway trees have already been felled. At present there are around 1200 street trees scheduled for felling before the end of 2017.

According to Sheffield Trees Action Group members, the best available information is that around 237 of these are Common Limes, about 20%, and a very large proportion of the big trees in that list. Complete certainty about these numbers is not possible as some of the data is missing, some of the limes may have been felled already and there may be more limes in the missing lists.  Detailed information about species and numbers affected is difficult to obtain as data appears only very briefly for public access.

Of 1666 street trees In Nether Edge, Carterknowle and Sharrow areas, 289 were threatened with felling. Of these 61 have already been felled. 228 remain to be felled, including 110 lime trees.

Rivelin Valley Road has an avenue of 700 lime trees, the second longest in the UK. 31 of the trees are scheduled for removal, mostly in two areas along the road. Most of the trees are healthy. They are listed either because they are disturbing curb stones or because it is anticipated that the tarmac planing machine would damage the roots during the resurfacing process. Over 6000 people have signed a petition to save the trees on Rivelin Valley Road. There will be a debate on the petition in a full council meeting on 1st February. A protest will gather outside the Town Hall at 1 p.m.

Sheffield street trees include several species useful to bees. Lime trees are particularly important because the city is outside the area of the country where lime species are native and they don’t occur in woodlands within the city boundary. Common limes are present predominantly as street trees. This means if they are replaced in large numbers there will be a significant loss of mature canopy of this species for decades until the replacements are mature. It appears that felled limes are to be replaced with small leaved lime which are about 10 metres less tall.

Unlike other city trees, limes produce blossom as late as July when honey bee colonies, which have built up in the spring and made it through the June gap, can lay down stores for winter and provide a share for the beekeeper.   Stand under a lime, heavy with blossom on a warm day, and you will hear it buzz. Limes are also visited by bumble bees. Flow of nectar varies with the weather but lime is an important harvest we rely on.

There are more than 200 beekeepers in Sheffield with a total of something between 1000 and 1500 hives. Sheffield Beekeepers’ Association has trained an average 35 new trainees in beekeeping each year over the last 5 years, many of them simply motivated to do something to help bees. Meanwhile our city council is ‘managing’ street trees in a completely unsustainable manner, damaging bee foraging habitat in such a way it will not recover for decades.

Most of the trees scheduled for felling are completely healthy. Justifications given for felling are disease, dead or dying trees, damage caused to pavements, displacement of kerbs and discrimination against wheelchairs and buggies, i.e. bumps in the pavement.

This latter is being used to justify cutting down a beautiful, mature, healthy resilient Dutch elm disease surviving elm tree in Nether Edge. The tree is habitat for a colony of rare white-letter hairstreak butterflies, uniquely dependent on this species of tree. Residents organised an open top bus event so that people could see the butterflies in the high branches. The tree was ‘runner-up’ in a competition to find the Nation’s favourite tree. It is still under threat.

This is a measure of what Sheffield Tree Action Groups are up against. Felling as a treatment for uneven pavements and out of place kerbs is neither necessary nor acceptable. Other technical solutions are available. Councillor Lodge says they are unaffordable.

Another justification used by the Council is that Sheffield’s street trees are reaching the end of their life and need to be replaced. According to other expert opinion this is based on the wrong criteria for street trees. Jeremy Barrell addressed a seminar organised by STAG groups on 21st January 2017. (link to more information here . He explained that the economically optimum time to harvest a tree for its timber is relatively early in its maturity, in his presentation example, at about 51 years. The value of street trees and heritage trees is in their cultural significance, biodiversity, ecosystem services, aesthetics and promotion of health and well-being. The mature canopy of such a tree can continue to give its best value in these qualities up to an age of around 270 years or more. A street tree felled at age 80 has given only 25% of its potential value.

We need a management strategy which is sustainable and follows professional standards of good practice as advocated by Government and the Chartered institute of Highways and Transport.

Finally, Councillor Shaffaq Mohammed has discovered that Amey does things differently in Birmingham (video on STAG Facebook). There they manage to resurface around the base of street trees and they don’t fell trees just because the growth encroaches on the kerb. If Amey can do it in Birmingham why not here in Sheffield?